Making A Good Impression: How VoIP Can Help A Sole Trader Or Micro-Business 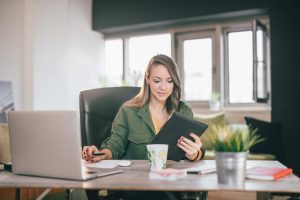 Many smaller businesses struggle to make an impression. When up against the big players in a market place, it can be difficult to make yourself stand out. And how do you become bigger when the bigger guys are competing against you.

The answer could lie in a VoIP system.

With the potential to give a load of additional features, a VoIP system will allow a smaller business to appear like a larger one. An IVR menu can guide calls as they come in, giving a better customer experience and giving the appearance of a larger company.

Music on Hold gives the same advantages, as do Ring Groups directing calls.

Sole Traders can benefit from a Memorable Number, a local number area code, a virtual land-line sending calls to a mobile, or a one-person set-up delivering a VoIP service.

A micro-business (defined as one employing fewer than 10 employees) can also reap the benefits of a VoIP system. They might have more sophisticated requirements than the one-man band. They may need more sophisticated call routing for a larger staff count, and the ability to transfer call between users. A VoIP system allows much more complicated phone set ups than were traditionally possible.

A Hosted VoIP system will send calls to any of the users specified when a caller rings up, and the system will then allocate calls according to the user’s wishes. One, two, three or all phones can ring when the main number is called. Calls can be passed to a dedicated person, or a team. You can use a receptionist to answer calls, an answer team, or an independent call answering service.

If you don’t want to employ a receptionist, then a a menu auto-attendant (where you hear a voice which, for example, prompts: “Press one for sales, two for accounts” ) can guide callers to the correct person or department. Just one of the many enhanced features available on many Hosted VoIP services, this saves staff time, and enhances the customer experience.

All these things make for an improved experience for customers. Smaller organisations seem bigger. A room with one person in it makes the same impression as a building with various teams and departments. The upshot of it all is customers feel happier and more reassured doing business with a smaller company.

Which, of course, is a good way for a small company to become a larger one.